2) Harold Grey owns a small farm in the Salinas Valley that grows apricots. The apricots are dried on the premises and sold to a number of large supermarket chains. Based on past experience and committed contracts, he estimates that sales over the next five years in thousands of packages will be as follows:

Assume that each worker stays on the job for at least one year, and that Grey currently has three workers on the payroll. He estimates that he will have 20,000 packages on hand at the end of the current year. Assume that, on the average, each worker is paid $25,000 per year and is responsible for producing 30,000 packages. Inventory costs have been estimated to be 5 cents per package per year, and shortages are not allowed. Based on the effort of interviewing and training new workers, Farmer Grey estimates that it costs $500 for each worker hired. Severance pay amounts to $1,000 per worker.

a) Assuming that shortages are not allowed, determine the minimum constant workforce that he will need over the next five years.

b) Evaluate the cost of the plan found in part (a).

c) Formulate this as a linear program.

d) Solve the problem and round-off the solution and determine the cost of the resulting plan. 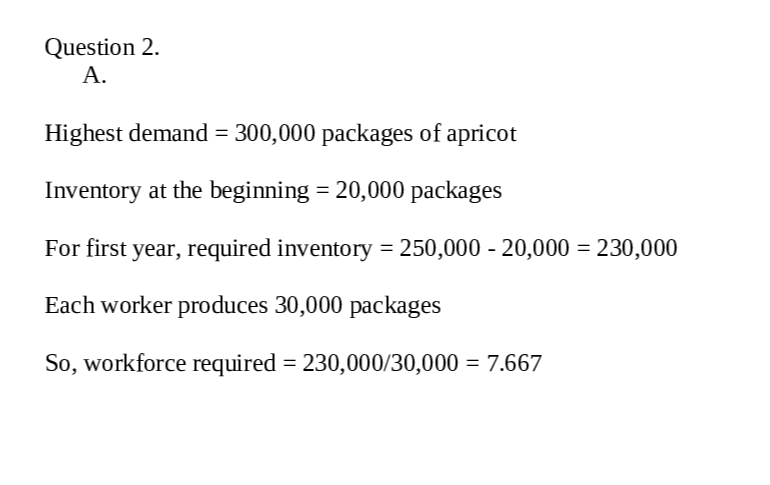 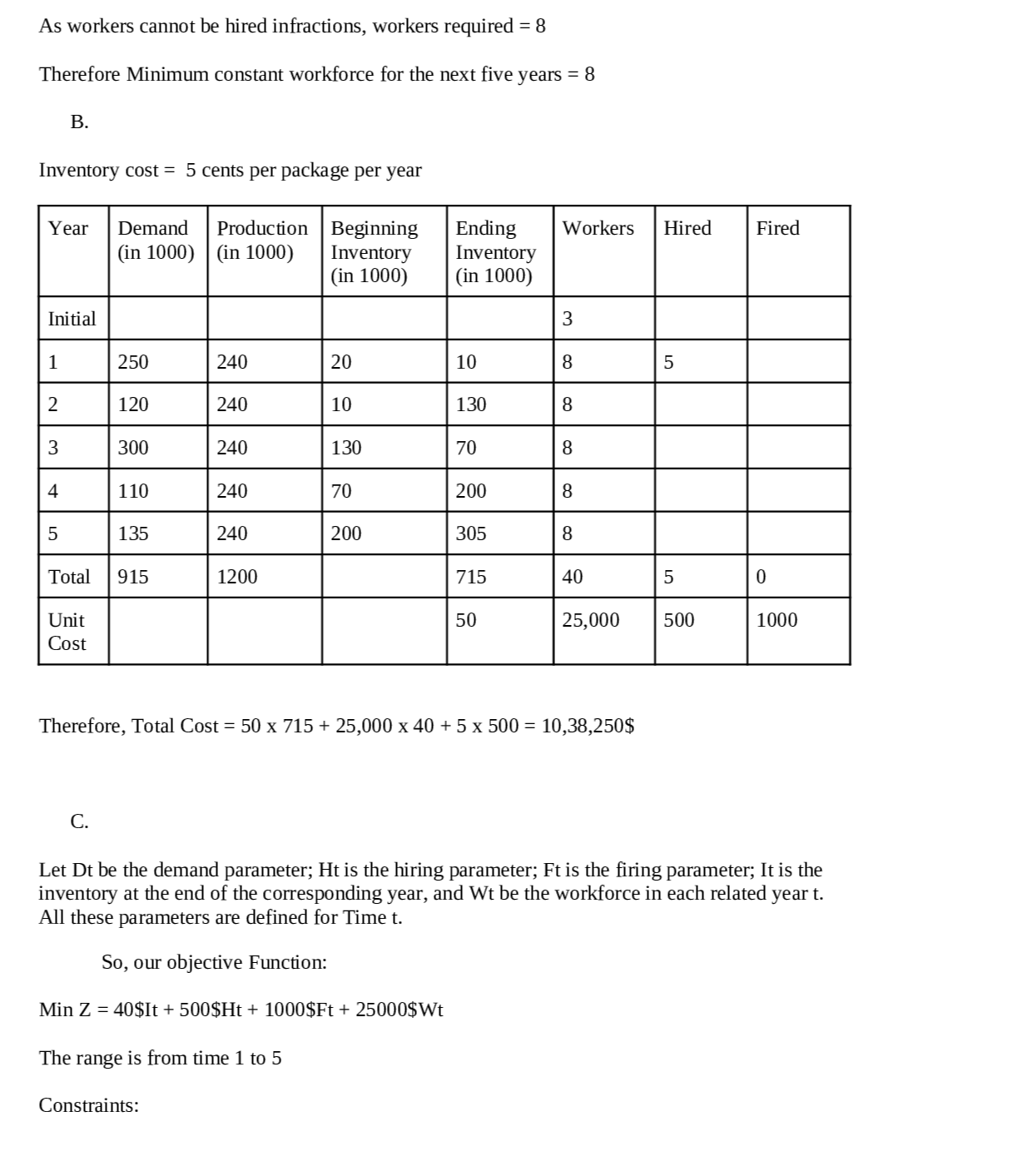 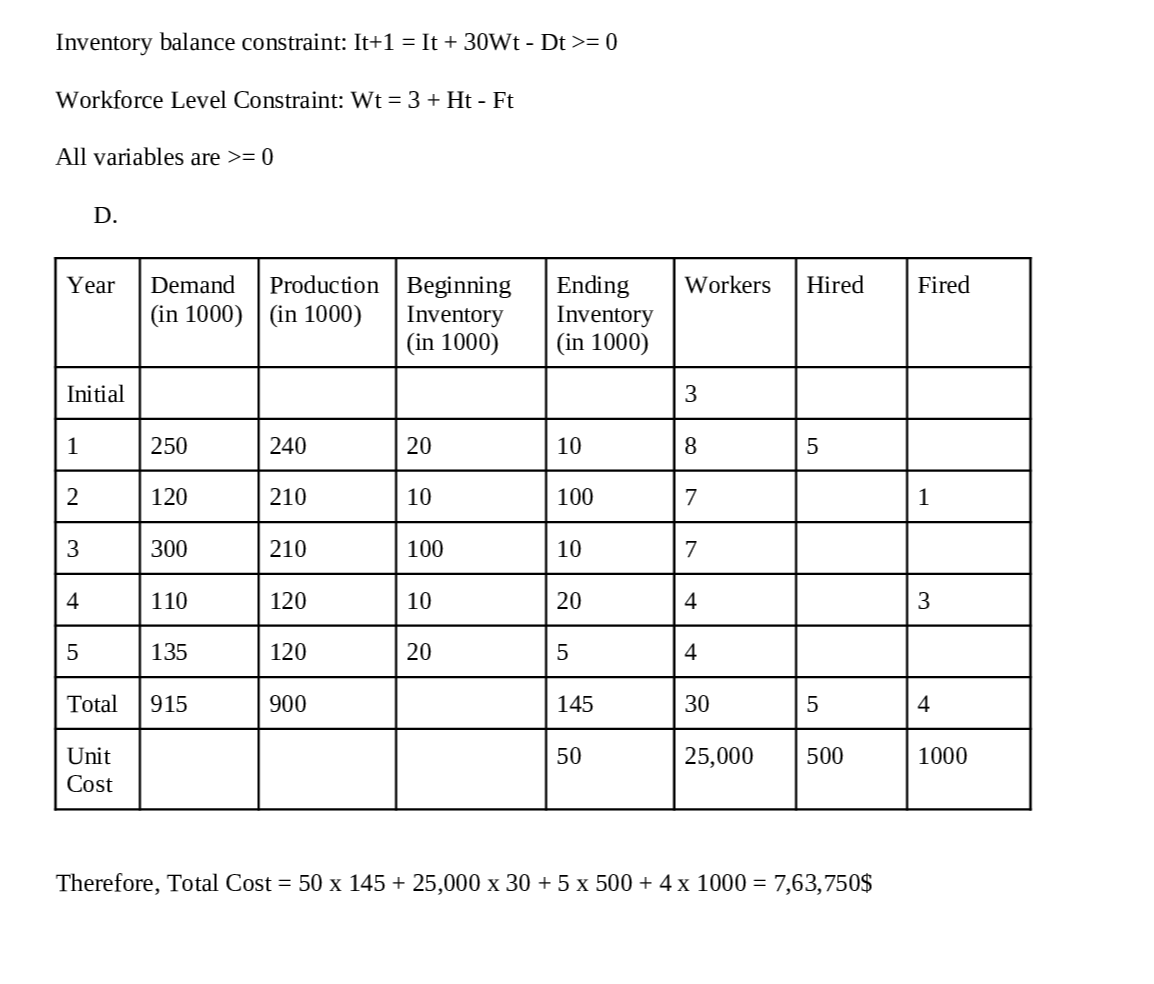 2. A steel manufacturer is located close to Kuala Lumpur. During production, it emits carbon monoxide which creates an external cost to the local community. The private cost of production creates the external cost to the public and the car producers incurs the private benefit.
Draw a graph to show the market price and quantity and plot the effects of includingexternal costs. Show the socially optimal quantity of steel. (2 marks)
Show the area of net welfare loss on your graph. (2 marks)
Pigouvian Tax can be employed to deal with the problem of external costs. Show in the graph and explain how the tax can solve the problem. (2 marks)

1. The countries of X and Y produce diamonds and pearls. The production possibilities scheduled below describes their potential output in tons per year: (14 marks)
a. What is the opportunity cost of diamonds for each country? (1 mark)
b. What is the opportunity cost of pearls for each country? (1 mark)
In which good does Country X have a comparative advantage? (1 mark)с.
d. In which good does Country Y have a comparative advantage? (1 mark)
e. Suppose Country X is producing and consuming at point B on its production possibilities curve and Country Y is producing and consuming at point C on its production possibilities curve. Construct a table to explain why both nations would benefit if they specialized in each good. (5 marks)
f. Draw a graph and use it to explain how Country X and Country Y benefit if they specialize and Country X agrees to trade 50 tons of diamonds to Country Y and Country X receives 50 tons of pearl in exchange. (5 marks)

Consider 2 countries, Holland and Sweden (H and S). The marginal productivities of one year of labor in the industries Machinery (M) and Furniture (F) are given in the following table:
Each country has a population of 10 million people, all of whom provide one unit of Labor.
a. Graph the PPFS for Holland and Sweden. Throughout the problem, put Machinery on the X-Axis.
As in lecture, assume that the national utility function is the same in each country and given by a Cobb-Douglas formula: U(M,F)=M'²F². This makes
M U_{M}=\frac{1}{2} \frac{F^{\frac{1}{2}}}{M^{\frac{1}{2}}} \text { and } M U_{F}=\frac{1}{2} \frac{M^{\frac{1}{2}}}{F^{\frac{1}{2}}}
b. What is the formula for the Marginal Rate of Substitution?
c. In autarky, what is the production/consumption levels of M and F in Holland?InSweden?
d. What is the utility level for Holland in Autarky? For Sweden?
e. Plot the excess demand and excess supply curves for Machinery at world price ratios(P=Pm/Pf) bet greater than 1. (As part of this, you’ll need to determine which country is the excess demander and which is the excess supplier for M.)
f. At what price ratio does excess demand equal excess supply for Machinery?
g. At the price ratio you found in part f, how much Furniture is exchanged across the countries?
h. After trade, what is the utility level for Holland? For Sweden?

Q3. For the given data, calculate the Consumer Price Index (CPI) for each year using 2017as the base year. You are also required to calculate the inflation rate for 2018 and 2019.