i. The reflection coefficient

(b) The Direct Broadcast System (DBS) satellite (at a distance of 39000 km)transmits at 13 GHz in the Ku Band, with a transmit power of 200 W, with a transmit antenna gain of 35 dB and with an IF (Intermediate Frequency)bandwidth of 30 MHz. The ground receiving station dish has a gain of 32 d Band sees an average background brightness temperature of Tb = 50 K. The receiver LNB (Low Noise Block) has a noise figure of 1.8 dB. Find:

ii.The power received at the input of the LNB

iii.The signal to Noise ratio at the LNB output

iv.Comment on what would happen if both transmit and receive antennas are replaced by typical monopole antennas.

(c) A certain two-port network is measured and the following scattering matrix is obtained:

From the data determine:

i.If the network is reciprocal

ii.If the network is lossless 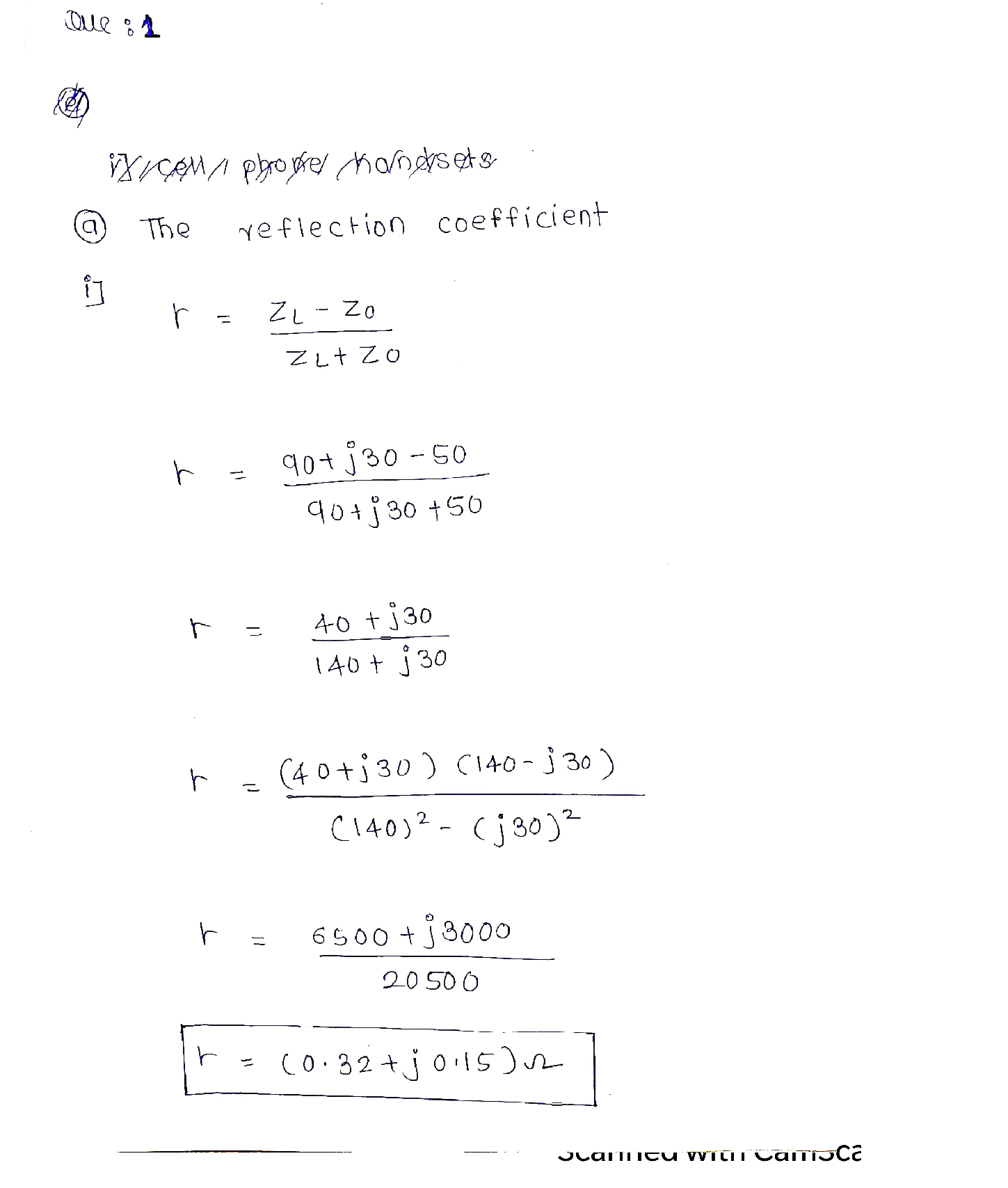 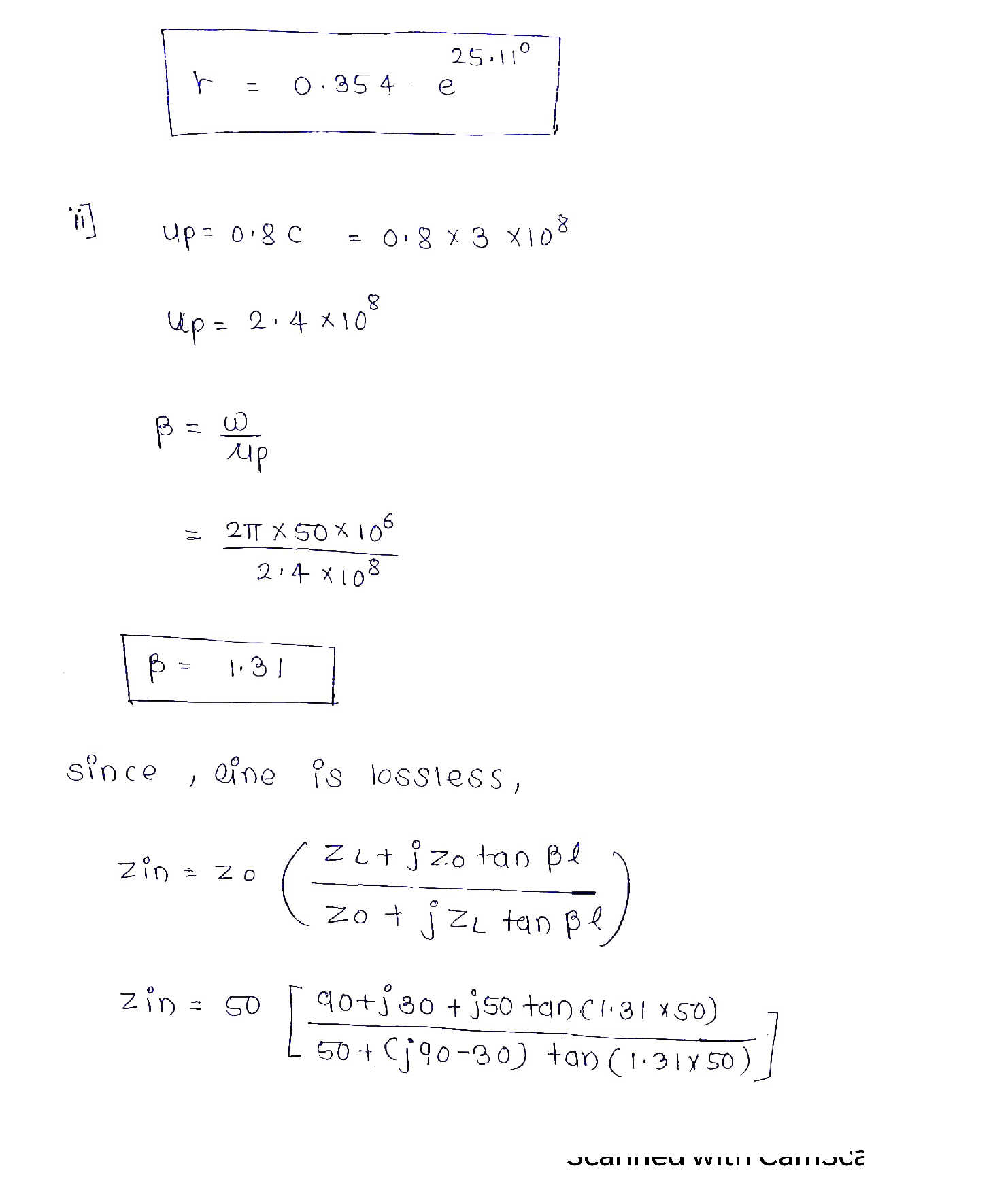 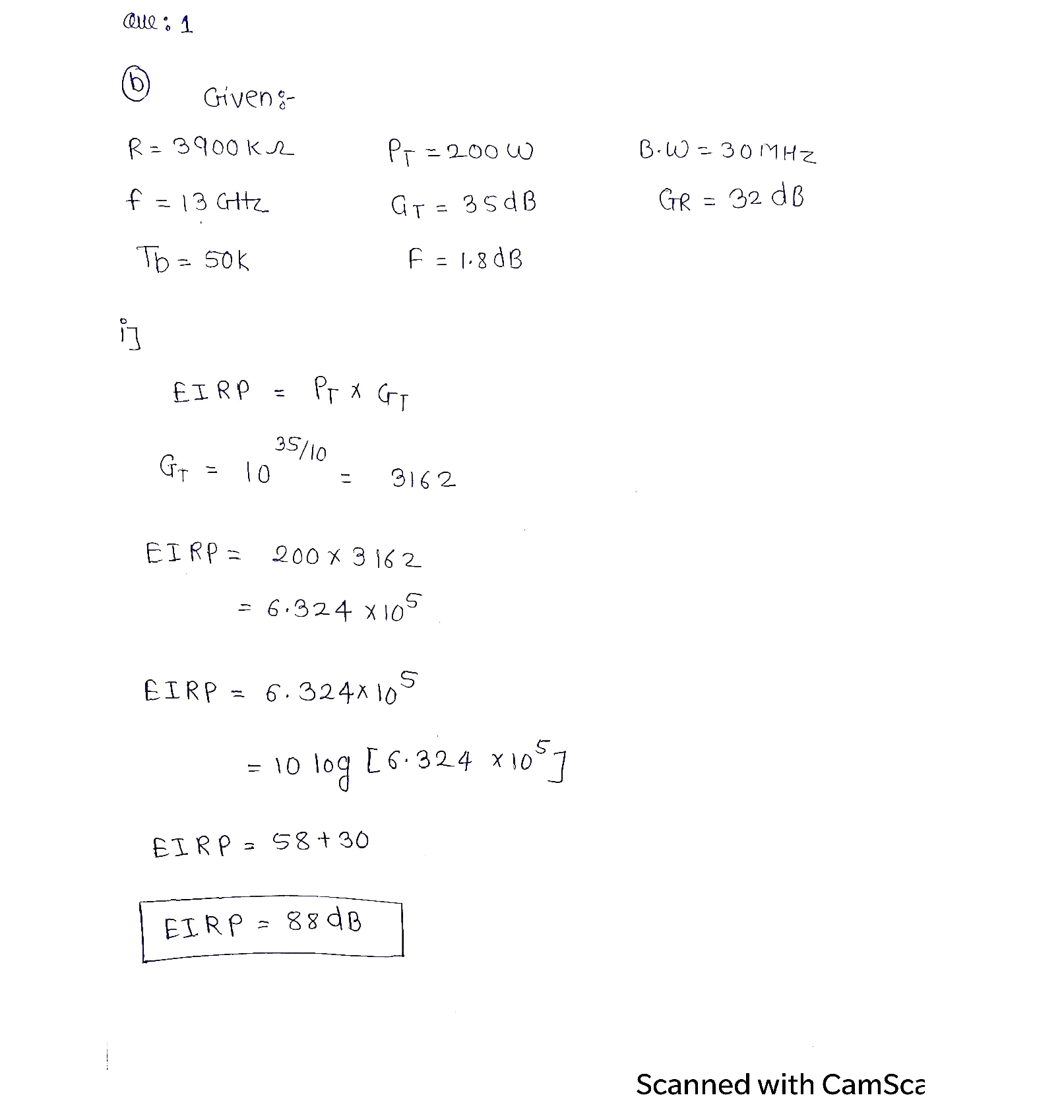 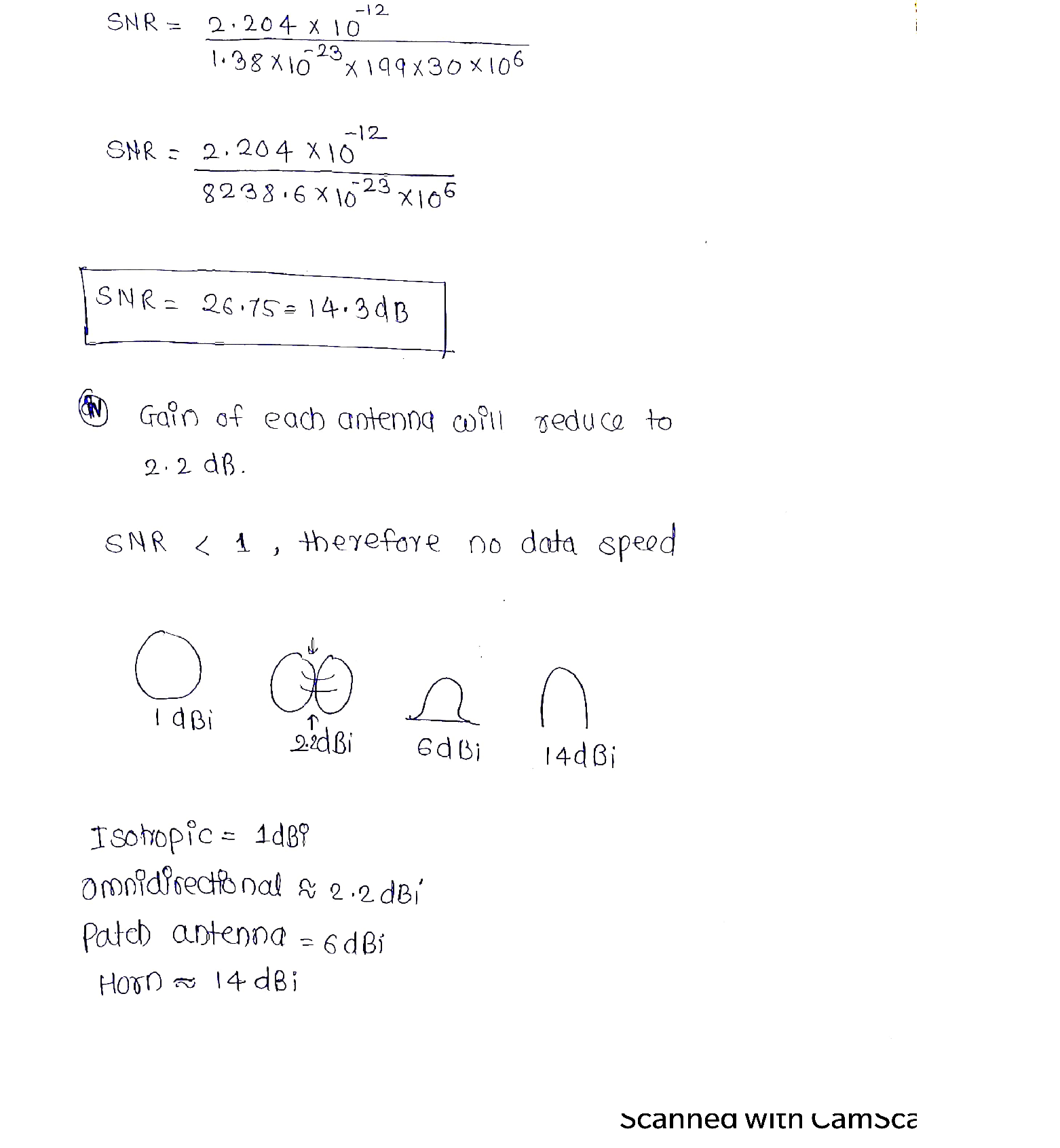 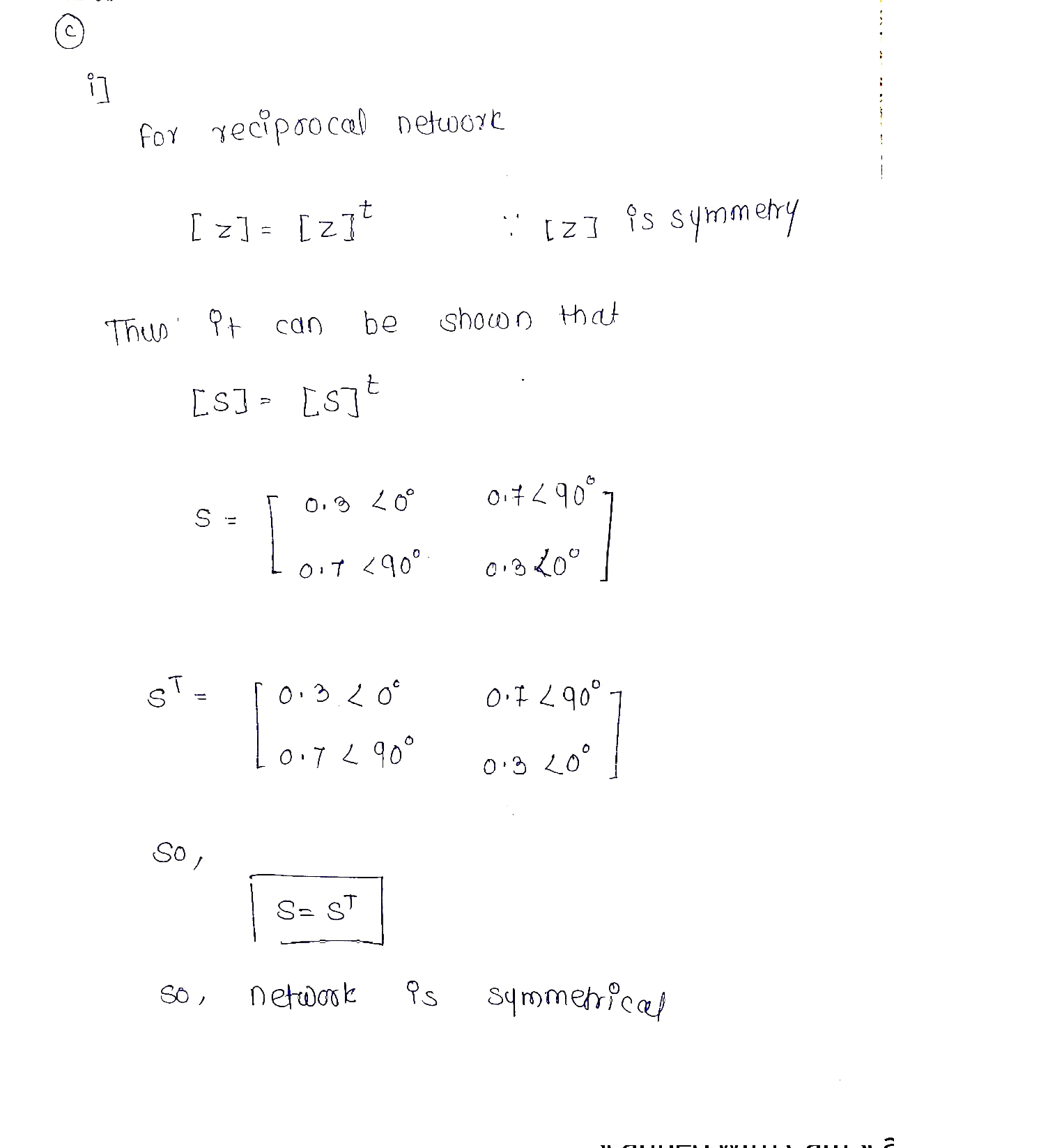 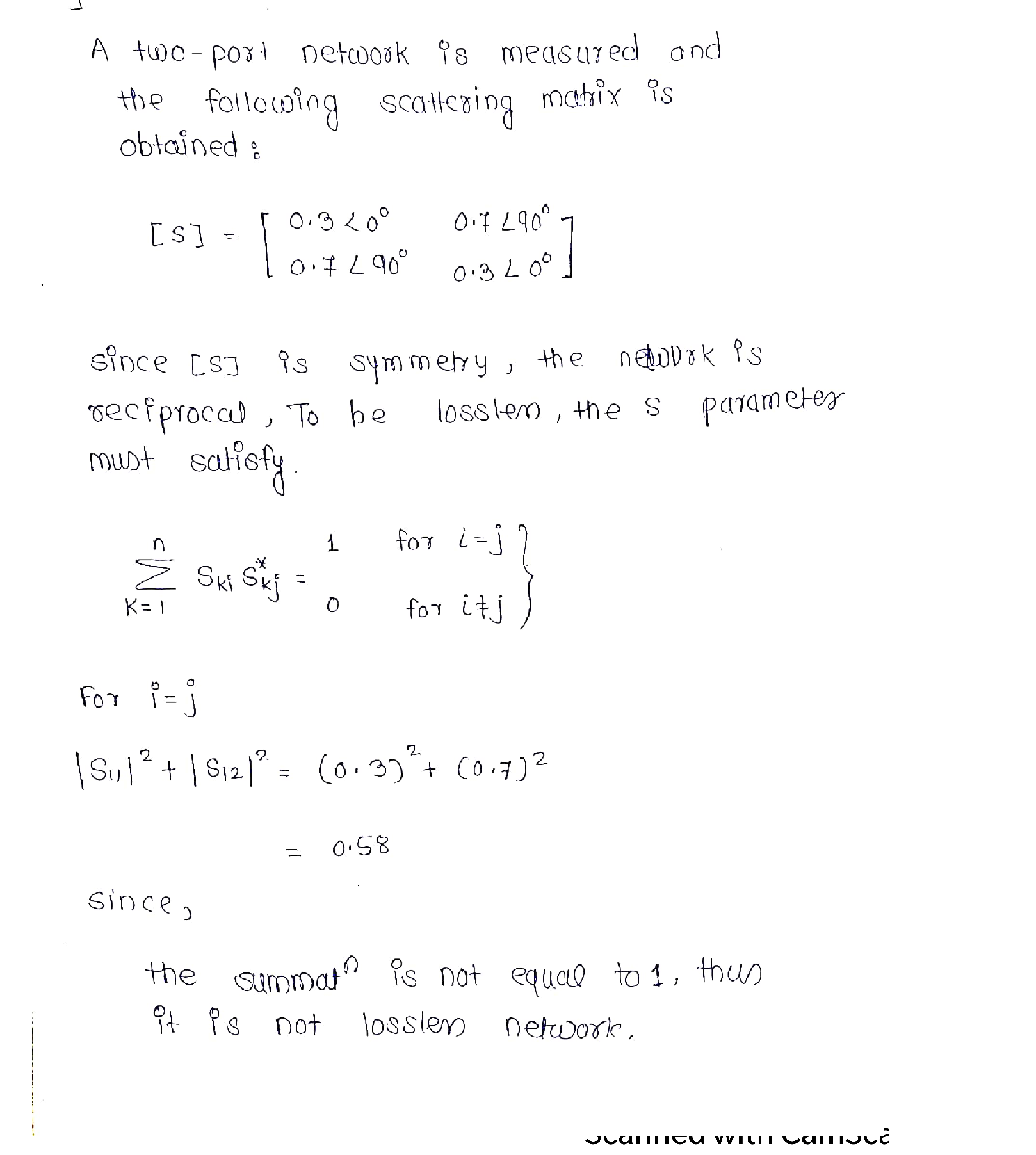 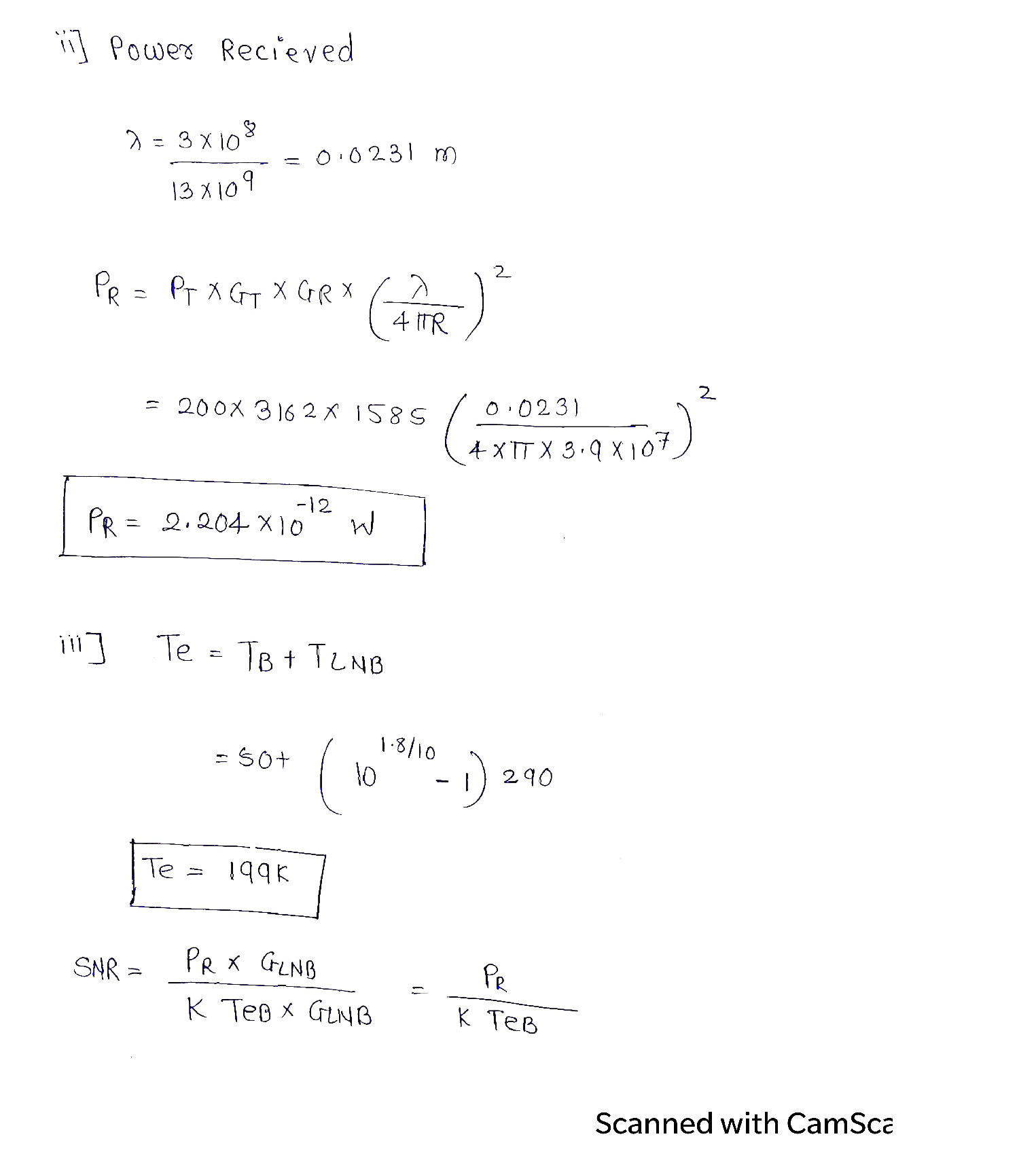 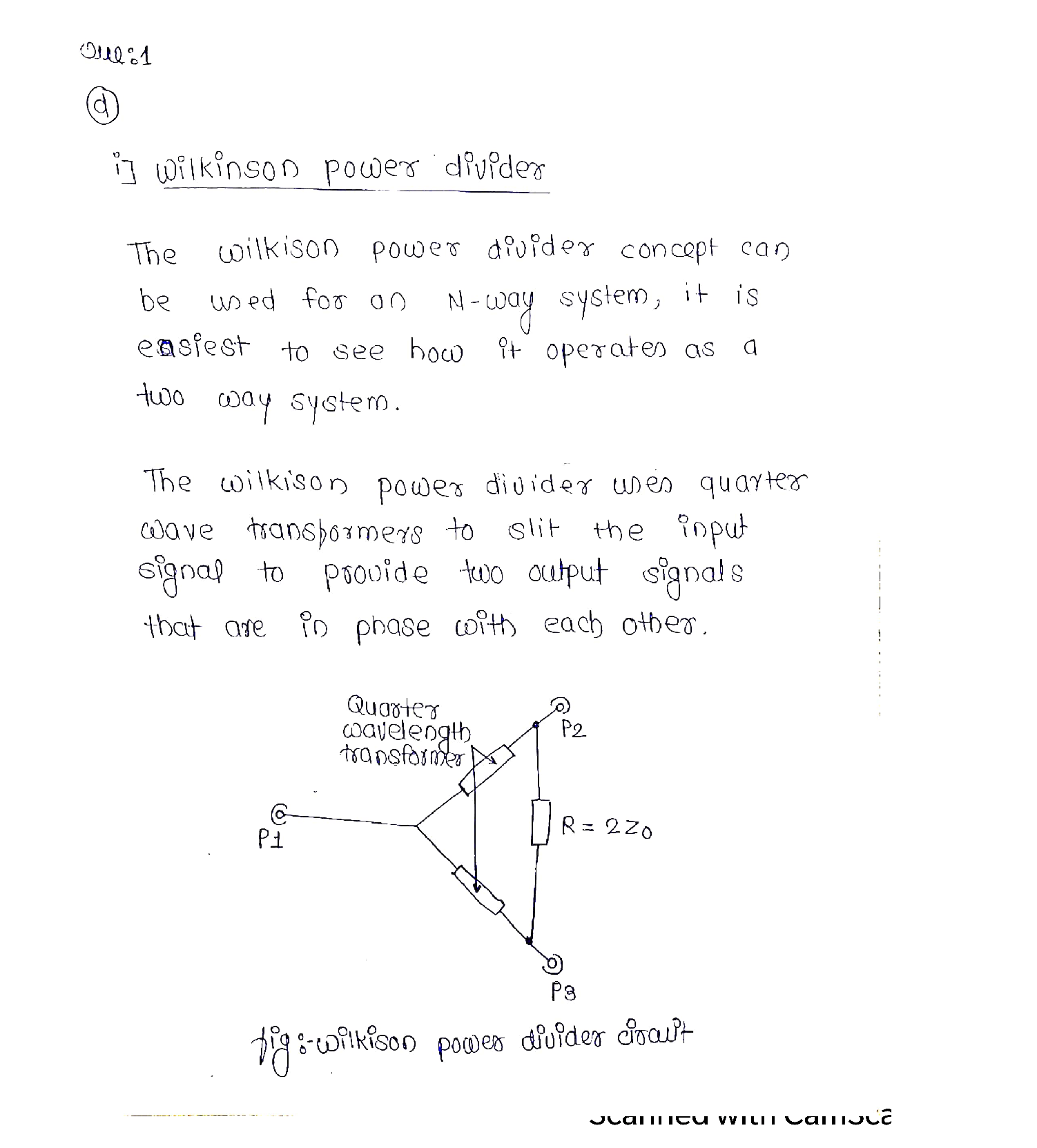 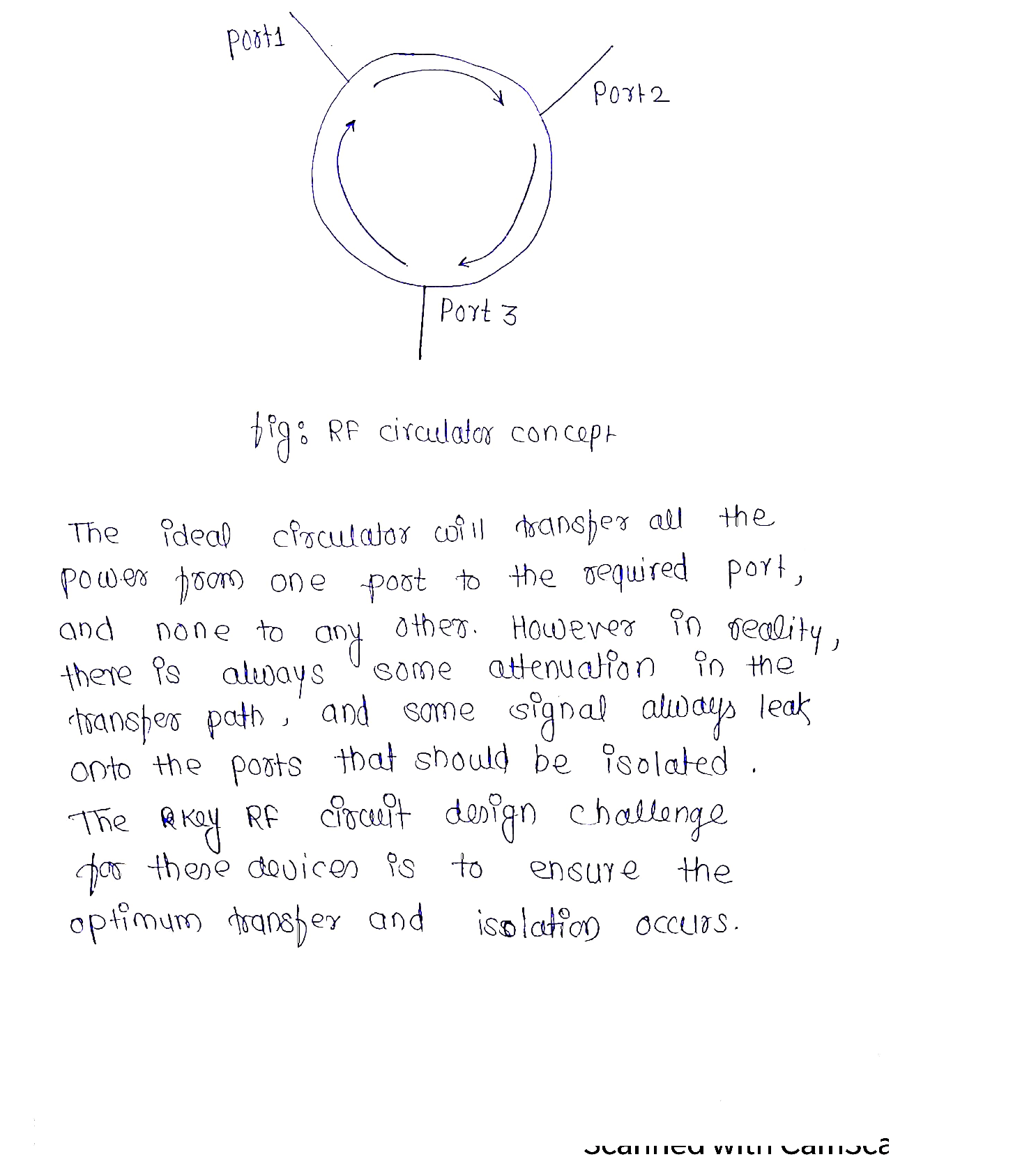 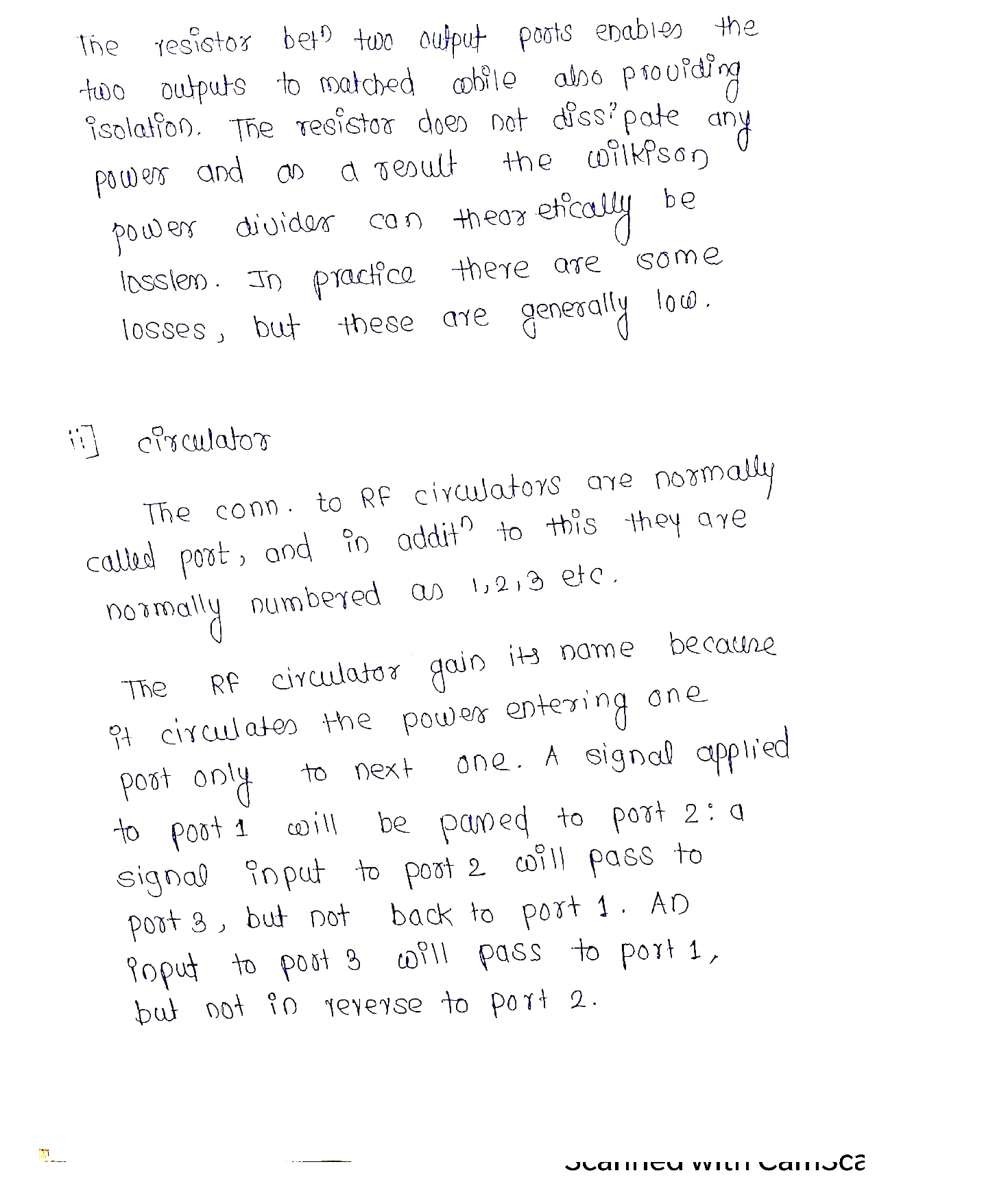 ). Design a 10 × 8 (10 in the x-direction and 8 in the y) element uniform planar array so that the main maximum is oriented along thetag = 10°, phi o = 90°. For a spacing of d, = d, = 1/8between the elements, find the
(a) progressive phase shift between the elements in the x and y directions
(b) directivity of the array
(c) half-power beamwidths (in two perpendicular planes) of the array.

It is desired to design a uniform ordinary end-fire array of 6 elements with a maximum toward theta o = 0° and 0, = 180°, simultaneously. Determine the
(b) excitation progressive phase shift (in degrees) that should be used
(c) approximate directivity of the array (dimensionless and in dB)
(d) relative value (in dB) of the magnitude of the array factor toward broadside (0, = 90°)compared to that toward the maximum (theta, = 0° or 180°).
(a) smallest separation between the elements (in 1).

There is a requirement to design a digital broadcast transmission system that uses QuadratureAmplitude Modulation (QAM) and Orthogonal Frequency Division Multiplexing (OFDM).
a) Explain with the aid of diagrams how QAM encodes and decodes data and explain the difference between data rate and symbol rate.(8 marks)
b) Explain with aid of diagrams why Orthogonal Frequency Division Multiplexing (OFDM)would be a suitable modulation scheme for a digital broadcast transmission system and why the symbol duration is an important design consideration?(8 marks)
c) If the transmission system was capable of transmitting 64kbps with a symbol rate of 4ms.(Please show and explain all calculations for the following):
b. Explain and justify the QAM encoding level required to achieve the above.
Determine and justify the number of OFDM carriers.

If the Signal to Noise Ratio (SNR) of a wireless link is 20DB and the Radio Frequency(RF) bandwidth is 20kHz, using Shannon's capacity formula, determine the maximum theoretical data rate that can be transmitted.(5 marks)
b)With the aid of block diagrams explain the principle operation of (DSSS) Direct Sequence Spread Spectrum and (FHSS) Frequency Hopping Spread Spectrum transmission techniques.(12 marks)
With the aid of a diagram and a brief explanation, what is the purpose of the autocorrelation function, and how does it work in a DSSS WLAN.(8 marks)

With the aid of a diagram, show how a transmission line can be represented as anelectric circuit; and list the electrical properties of the transmission line with appropriateunits of measurement.(4 marks)
When considering a pulse moving along a transmission line; with the aid of a diagram,explain the difference between a lumped and distributed system with reference to thetwo-way delay time 2·t and the rise time of the pulse.(6 marks)
With the aid of diagrams, explain what happens when the load of a terminatedtransmission line:
If a correctly terminated line has a characteristic impedance of 50 ohms and a measuredvelocity of propagation of 2.2 x 108 m/s with an attenuation of 6dB/km. If a faultdevelops, and the reflected pulses are returned non-inverted after 10us with amagnitude 0.025 of that of the transmitted pulse. Calculate the resistance and position(9 marks)of the fault
(ii) Decreases in resistance.
(i) Increases in resistance.